The principal accounting policies adopted in the preparation of these Company and consolidated financial statements are set out below. These policies have been consistently applied to all the years presented, unless otherwise stated.The Group has adopted the following new standards and amendments to standards, including any consequential amendments to other standards, with a date of initial application of 1 January 2014.

The financial statements have been prepared under the historical cost basis, as modified by the revaluation of available-for-sale financial assets and certain other financial assets at fair value.Despite the deficiency in net current assets of $35,846,000 (2014: $13,298,000) in the Company, the financial statements have been prepared on a going concern basis, which contemplates that the Company will be able to pay its debts as and when they fall due. The directors believe that this basis is appropriate as the Company has the ability to upstream dividends from its subsidiary companies, there are currently undrawn banking facilities totaling $3,000,000 available, and an amount of $14,315,000 is due to related parties which the directors believe is capable of being renegotiated as to payment date. The Company also has a positive cash flows from operating activities and can call upon related party receivables of $12,437,000 (classified as non-current due to management’s expectation of realization) when the need arises.The Group net current asset deficiency of $12,585,000 (2014: $16,464,000) is due to short term fixed term deposits totaling $56,516,000 (2014: $72,847,000) in respect of Merchant Finance & Investment Company Limited which the directors expect will be rolled over at maturity.

Standards, amendments and interpretations issued but not yet effective

The following standards, amendments and interpretations to existing standards have been published and are mandatory for accounting periods beginning after 1 July 2014 which are relevant to the Group, but the Group does not plan to early adopt them. The impact of these standards and interpretations on the financial statements of the Company and the Group has not yet been fully determined.

Use of estimates and judgments

The preparation of the consolidated financial statements in conformity with IFRS requires management to make judgments, estimates and assumptions that affect the application of accounting policies and the reported amounts of assets, liabilities, income and expenses. Actual results may differ from these estimates.

Estimates and underlying assumptions are reviewed on an ongoing basis. Revisions to accounting estimates are recognized in the period in which the estimates are revised and in any future periods affected.

Information about significant areas of estimation uncertainty and critical judgments in applying accounting policies that have the most significant effect on the amounts recognized in the financial statements are included in the following notes:

Subsidiaries are all those entities over which the group has control. The Group controls an entity when it is exposed to, or has rights to,variable returns from its involvement with the entity and has the ability to affect those returns through its power over the entity. Subsidiaries are fully consolidated from the date on which control is transferred to the Group. They are de-consolidated from the date that control ceases.

The acquisition method of accounting is used to account for the acquisition of subsidiaries by the group. The cost of an acquisition is measured as the fair value of the assets given, equity instruments issued and liabilities incurred or assumed at the date of exchange. Identifiable assets acquired and liabilities and contingent liabilities assumed in a business combination are measured initially at their fair values at the acquisition date, irrespective of the extent of any non-controlling interest. The excess of the cost of acquisition over the fair value of the group’s share of the identifiable net assets acquired is recorded as goodwill. If the cost of acquisition is less than the fair value of the net assets of the subsidiary acquired, the difference is recognized directly in the statements of profit or loss and other comprehensive income. Transaction costs, other than those associated with the issue of debt or equity securities that the Group incurs in connection with a business combination are expensed as incurred.

Associates are those entities over which the group has significant influence but not control over the financial and operating policies. Significant influence is presumed to exist when the group holds between 20% and 50% of the voting rights. Investments in associates are accounted for using the equity method of accounting and are initially recognized at cost which includes transaction costs.

The group’s share of its associates’ post-acquisition profits or losses is recognized in the statements of profit or loss and other comprehensive income, and its share of post-acquisition movements in reserves is recognized in reserves. The cumulative post acquisition movements are adjusted against the carrying amount of the investment. When the group’s share of losses in an associate equals or exceeds its interest in the associate, including any other unsecured receivables, the group does not recognize further losses, unless it has incurred obligations or made payments on behalf of the associate.

Unrealised gains on transactions between the group and its associates are eliminated to the extent of the group’s interest in the associates.

Unrealised losses are also eliminated unless the transaction provides evidence of an impairment of the asset transferred.

Dilution gains and losses arising on investments in associates are recognized in the statements of profit or loss and other comprehensive income.

(a) Functional and presentation currency

Items included in the financial statements of each of the group’s entities are measured using the currency of the primary economic environment in which the entity operates (‘the functional currency’). The consolidated financial statements are presented in Fijian Dollars, which is the Company’s and the Group’s functional and presentation currency.

(b) Transactions and balances

The assets and liabilities of foreign operations, including goodwill and fair value adjustments arising on acquisitions, are translated to the functional currency at exchange rates at the reporting date. The income and expenses of foreign operations are translated to Fijian dollars at exchange rates at the dates of the transactions.

Cash and cash equivalents comprise cash balances and call deposits with maturities of three months or less from the acquisition date. For the purposes of the statements of cash flows, cash and cash equivalents comprise cash on hand, deposits held at call with banks and bank overdrafts. Bank overdrafts are included within borrowings in current liabilities on the balance sheet. 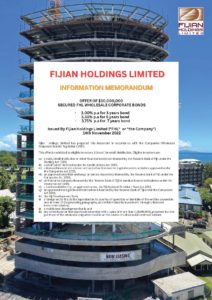