Abilash Ram is currently the Acting Group CEO of FHL group. He was appointed on the role by the Board in December 2019. He is the Acting Chairman of Merchant Finance Pte Limited and Chairman FHL Stockbrokers Pte Limited, FHL Retailing and FHL Media Pte Limited. Mr Ram is board member in all FHL subsidiary companies as well as the associate companies of Marsh, Pernix, Golden Manufactures and Ritam Investment. Mr Ram is also Board Director with APCO Coatings and Pacific Green Limited.

Abilash joined the company in 2012 under the Graduate Trainee program having had 4 years’ experience in Audit with Ernst & Young. Mr Ram has close to 8 years’ experience with FHL Group working in Finance and Investment. He has worked across a number of group companies before being appointed Manager Finance at FHL in 2015 and later appointed CFO of the group. Mr. Abilash is a Charted Accountant (Fiji) by profession, CPA, member of Institute of Internal Auditors and AICD. He is also a Licensed Investment Advisor from RBF. Mr. Abilash has received training on Mergers and Acquisition (M&A program) from Singapore. 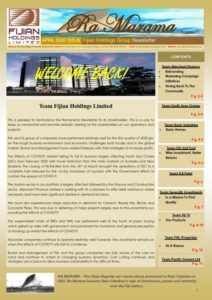